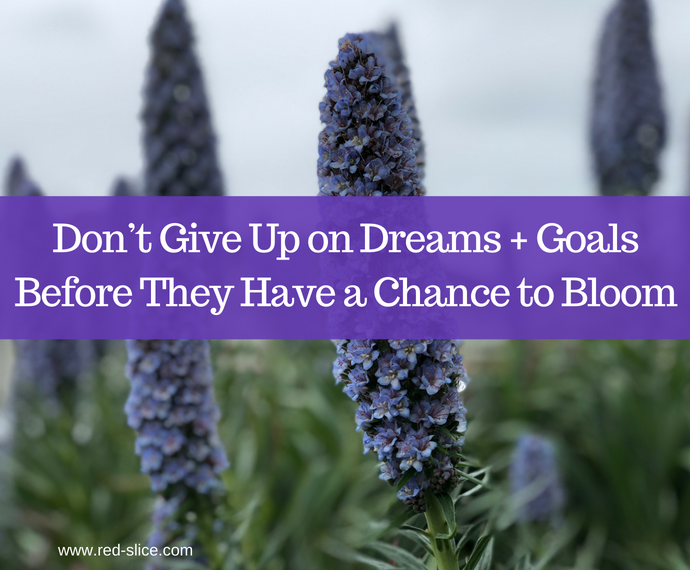 About two years ago, we had our new house landscaped, front and back. We’re talking major overhaul.

One of the plants our designer had recommend was a Pride of Madeira. It’s a bold, big, round plant commonly seen here in Northern California that can quickly get unwieldy if not properly maintained. But when it is properly loved, the purple conical flowers look so lovely amidst all that green.

The backyard ones quickly consumed the yard and, instead of offering up their lovely purple cone-shaped blooms, simply grew into unwieldy large green bushes. My husband tried pruning it the way he’d read about online, but nothing seemed to happen. We decided to rip those out and replace them with other options, as well as one of the ones in the front that was quickly threatening to take over our neighbor’s driveway.

There was one in the front, however, that we left along the side of the driveway. My husband worked on it when he could. But two seasons passed with no purple blooms. And it was just too big. We read that our big mistake had been not pruning these plants often enough in the beginning. The green leaves took over, hogging vital nutrients the purple flowers needed to bloom. My husband made a few attempts on this last surviving one, but still…nothing.

“Rip it out,” I begged my husband. “There are no blooms. You tried to prune it, but the flowers are just dead. They won’t come in now” I thought it must be beyond saving and didn’t want this big green monstrosity in the front yard anymore.

This past year, my husband tried one more time and really hacked at it. It looked anemic. But, finally, as it overnight, huge purple blooms spread across the bush. It was stunning. (See photo above)

The plant wasn’t dead yet. It just wasn’t properly nurtured.

The lesson here is not to keep banging your head against the wall in futility about a dream or a goal. The lesson is simply this:

Don’t give up on your dreams and goals before they are given the proper chance to bloom.  (TWEET THIS!)

Take a look at all avenues and be honest with yourself and what you’ve done to achieve them before you decide it is no longer viable. We gave half-assed attempts at nurturing this plant and too quickly said, “It’s done. It’s over.” That was on us. And saying things like, “I’m too old” or “I’m not smart enough” or “I don’t have the right connections” are simply excuses, not realities.

Before you give up on your business, book, or big idea, remember: Your dream may not be dead yet. It might just need some extra loving care and the right nutrients before it can bloom.