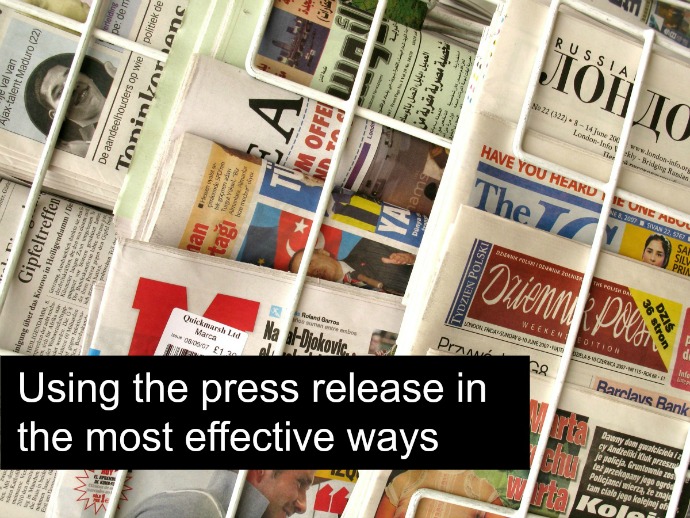 Ah, the poor press release. It’s been abused, distorted, asked to work miracles and is one of the biggest marketing and brand awareness misconceptions I’ve ever encountered in my 20+ year career.

Most business owners (and frankly, large company CEO’s) just don’t understand what a press release can – and cannot – do for your business and how to use it most effectively. Some people think everything they do is newsworthy; others treat it like a sales page or pump one out every week. Still others think you can produce one press release and – BAM! You’re on the cover of Fast Company.

Never fear. Help is on the way….

Use a press release the RIGHT way if you actually want press! (Tweet this!)

Nicole Francois is a marketing communication expert and runs MarketWell, an agency focused on health-related business.   She and I collaborate often and I love her practical, tough-love approach to getting press exposure. She even served as publicist for my memoir, Rebooting My Brain. Nicole majored in Journalism, produced news for major television networks and cut her teeth on press releases.  While the bulk of Nicole’s career has been focused on marketing, Nicole pulls from her six years of journalistic experience almost everyday.

I asked Nicole to weigh in on the ever-popular press release and how it really works for your business.

RS: OK, give us the straight scoop: what is a press release and how is it actually used or seen by the media?

NF: A press release can be many different things.  That stated it should always be a fact-based, and fact-focused document that is written in terms the media understands.  That means typically not leading with a quote from your CEO (unless he just media bombed at a women in tech conference, but I digress) but instead, start with a compelling ‘lead’ with the important components like: Who? What? When? Why? Where? How?  At least three of these questions should be answered in your first two sentences — and those sentences should be concise and easy to read. And if you expect to be taken seriously you must use AP-Style guidelines.

What journalists hate most of all is the advertising -release.  This, in our eyes, lowers your credibility and in journalism, credibility is everything.  So if you hammer a news department with faux-news, wannabe ad releases you, your business, and all of your clients are pretty much dirt.

While follow-up is important, we also hate publicist-types who keep trying once we’ve given a firm ‘no’.  We know if you’ve undermined us and you might even get away with it once or twice, but keep it up and you’ll be a target for vengeance.

RS: What won’t a press release do for you or your business?

RS: What should a business owner do before sending that next press release?

NF: Ask these 3 questions first and ensure the answer is “yes” before you hit SEND: